Powerful middlemen in India enjoy large margins, but price gains do not pass through to farmers

In developing countries, small farmers often cannot access organized markets directly. Instead, they sell to middlemen who resell their output to distant buyers. These middlemen appear to earn large margins, and they appropriate most of the gains from rising consumer prices. Results from African agricultural commodity markets indicate that when export prices rise by 1%, the prices that farmers receive tend to rise by less than 0.5% (McMillan et al. 2002, Fafchamps and Hill 2008).

Do middlemen earn large margins because they have more market power than farmers, or because they take advantage of the fact that farmers do not know downstream prices? Alternatively, are the large margins of middlemen compensation for services such as insurance against price risk, or transportation and storage? Might the low pass-through of changes in consumer prices to the farm gate be explained by an increase in the cost of providing these services, or by a decrease in quality in high-export-price regimes? Answers to these questions can help us understand how the benefits of globalisation trickle down to primary producers, and so design policies that can help boost growth and alleviate poverty.

Our research project examined contracting arrangements and market structure in the supply chain for potatoes in the eastern Indian state of West Bengal (Mitra et al. 2017). To do this, we randomly selected 72 villages in two potato-growing districts. We focused on potatoes because they generate the highest value-added per acre of any cash crop in West Bengal; hence, increased earnings from potato cultivation could provide an effective pathway out of poverty for small farmers in this region. Most farmers in the state own small plots, with the mean landholding just above one acre. Almost no farmers are able to contract directly with wholesale buyers. They sell instead to intermediary traders. These traders are located either in the village or near wholesale markets.

The data we collected through detailed farmer surveys suggested that middlemen margins were between 28% and 38% of the wholesale price. This suggests that farmers could earn 65-83% more if they could sell directly in wholesale markets. We also found that there was negligible pass-through from retail to farm-gate prices. For a one rupee increase in the price that end-consumers paid, middlemen received 80 paise more, but farmers received a mere 2 paise more – an increase so small that it is statistically indistinguishable from zero. Judging by standard models of pass-through in imperfectly competitive environments (Weyl and Fabinger 2014, Atkin and Donaldson 2016), this suggests that the trader-farmer link in West Bengal’s supply chain has extraordinarily large imperfections.

The supply chain for potatoes in West Bengal
The potato crop is harvested between January and March. During the rest of the year, farmers receive daily price offers from village traders. Farmers’ outside options are either to sell to intermediaries located outside the village, or to store their crop and sell it later in the year. More than 90% of the potato crop is sold to village traders. Figure 1 shows this supply chain.

Figure 1 The supply chain for potatoes in West Bengal 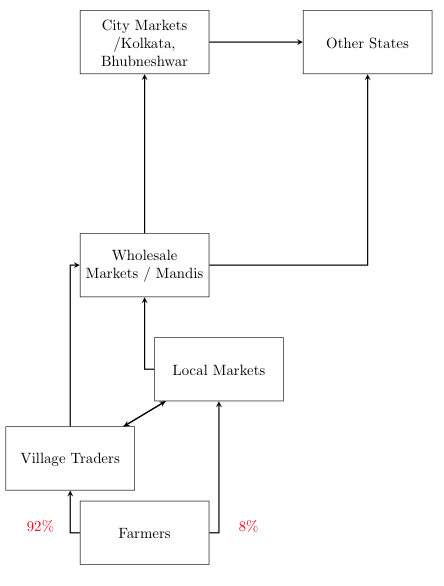 While the market within the village appears competitive by conventional concentration indices (about ten traders buy from 150-250 farmers in each village), village traders openly discuss and coordinate price offers, suggesting that they collude. Farmers also do not know the price at which middlemen resell potatoes to wholesale buyers. Survey responses indicated there were no explicit or implicit contracts between the middlemen and farmers. Instead, the market appeared to be characterised by ex post bargaining between village traders and farmers, in which the farmers had limited outside options.

To better understand trading mechanisms and the role of asymmetric price information, we conducted an experiment in which farmers in 48 randomly selected villages received information about the daily price at which middlemen resold potatoes in neighbouring wholesale markets. In 24 of these treatment villages, the information was provided privately to a random sub-sample of farmers using restricted cellphones. In the other 24 treatment villages, the prices were displayed on a public notice board. A third set of 24 villages received no information, and served as the control group. We conducted fortnightly farmer surveys throughout 2008, and collected data on each transaction. This allowed us to find out the quantity and quality of potatoes sold, the revenue received, the identity of the buyer, and the transport, handling, and storage costs incurred by the farmer. These data allowed us to compute the net price that the farmer received for each transaction, and to track how that price varied with neighbouring wholesale market prices.

We found that, as a group, farmers did not gain from being better informed. On average, informed farmers sold the same quantity as uninformed farmers and received the same price. Providing information, however, did increase pass-through, which rose from 2% to between 10% and 20%. Farmers’ earnings fell as a result of better information in low-price markets and rose in high-price markets, resulting in no net average effect (Figure 2).

These findings allow us to rule out alternative theories about how farmers and traders contract with each other. For example, if traders provided farmers with insurance against price risk, the information intervention would have increased the quantity that farmers sold to traders in low-price markets. Instead, we found the opposite. If middlemen margins were the result of the high costs for farmers of searching for buyers, the intervention should have lowered price dispersion within and across villages. We found no such effect.

Instead, our results point to different imperfections. Farmers have limited access to wholesale buyers, and middlemen can collude to squeeze their returns. Although the spread of information technology has made it relatively inexpensive to relay price information, our research indicates that, in this context, information interventions are unlikely to benefit farmers. Instead, measures that increase competition among buyers are more likely to be effective. Such measures could include improving the ability of farmers to transact directly with wholesale buyers, or encouraging external competition with local traders. A host of agricultural marketing regulations in West Bengal currently limit this competition, and it is not surprising that traders and their political lobbies have resisted any efforts at reform.

This article originally appeared on VoxDev on August 21, 2017.